Breaking Down: How Meetings Have Changed Throughout History 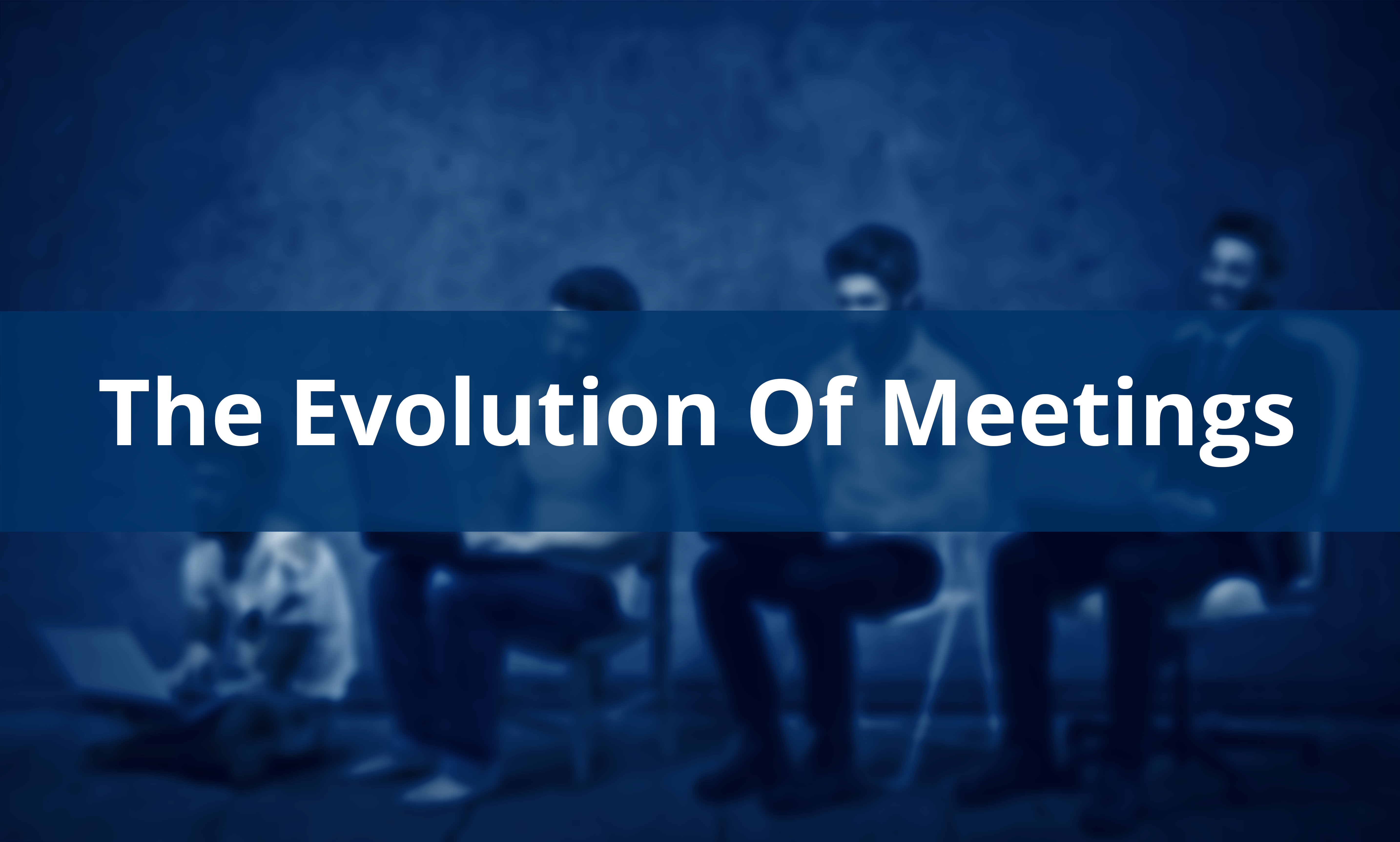 Nobody needs to be reminded that we are wasting time in meetings. Analytics shows that a company spends 300,000 hours a year on a single weekly meeting. For many people, meetings are the necessary evil to slog through in daily business life. The irony is despite the hostile reception; meetings are meant to be the backbone of today business landscape where more and more organisation tend to value team effort over individual endeavours. Jon Ryburg, president of the Facility Performance Group in Ann Arbor, Michigan and an organisational psychologist, often tells companies that they need twice as much meeting space as they did 20 years ago.

While some meetings are definitely wastes of time, it's essential now more than ever to produce productive meetings. In a well-meaning attempt to change the general perception toward meetings, let's go back in time to see how meetings have changed through the course of history.

Agora and the emergence of Greek democracy

While it's hard to pinpoint the exact time when the first meetings began, it's worth to notice that humans started gathering in public places or market squares exchange ideas since the early ages. By 600 B.C in Ancient Greece, thanks to the rapid development of trade and new innovations about both architecture and culture, every major city had an Agora - meaning a "meeting place", or later became "marketplace". The Agora was a public area, built in the middle of the city and consists of many public buildings and market stalls. People gathered inside the Agora for buying and selling goods, but the by-product of any gathering's chief function was talk. The topics might be political haranguing or common gossip, though philosophical concepts were discussed widely. Some of the greatest minds at the time were among the frequent visitors of the Agora in Athen, including Plato, Aristotle, and Socrates. It was the Athenian Agora that Socrates famously questioned the market goers on their understanding of the meaning of life.

Meetings in the Agora were mostly informal with casual settings, akin to the modern high power work lunch. The speakers often spoke in front of a big crowd, asked them questions to provoke critical thinkings on life matters. A lot of world's prominent philosophies were borne from those meetings and continue to affect our very daily life today. 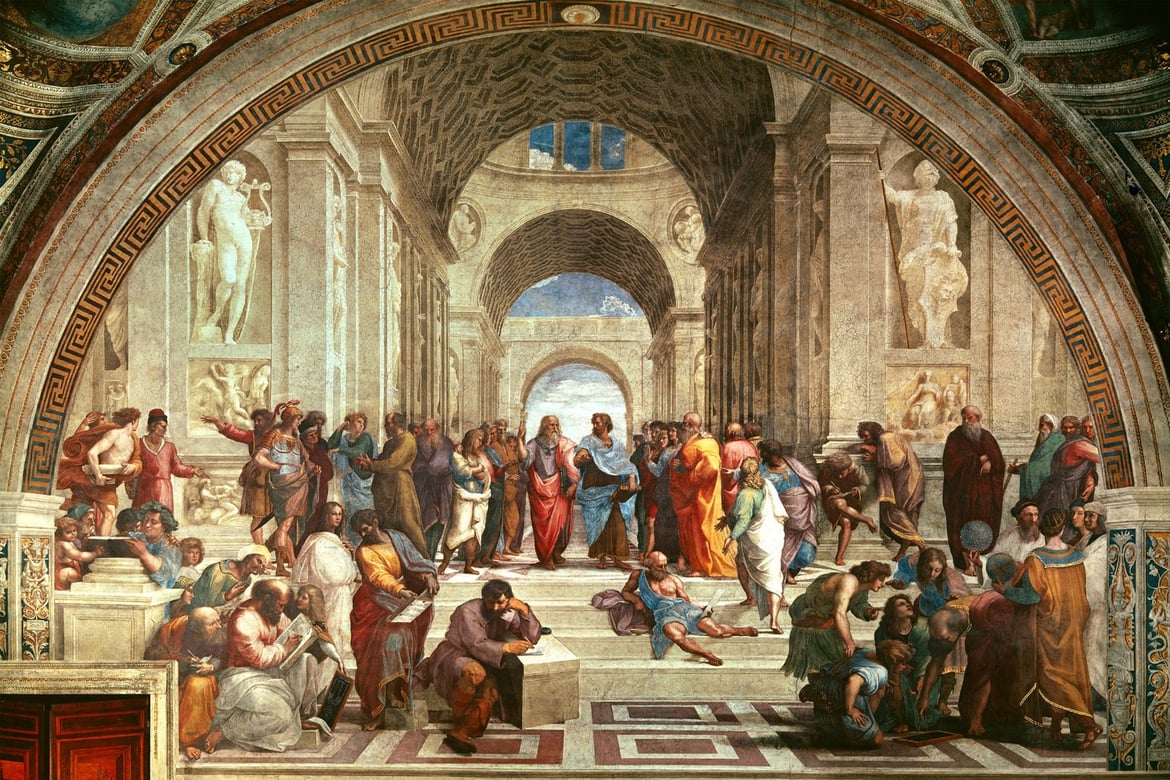 The 'School of Athens' fresco by Raphael. Credit: WikiArt

The Agora was also the place where the concept of democracy was borne and flourished. The Athenian believed in the consensus of the majority, and everyone saw their duty to serve on juries as a privilege. When there was a matter regarding laws and regulations that required voting, regular citizens would attend an open forum in the Agora to discuss and cast their votes. Both the city law courts and Senate resided inside the Agora to demonstrate this open, egalitarian nature.

Roman Forum and the meticulous procedures of the Senate's meetings

Until the Roman Republic took over Greek in around 146 BC, the Roman had adpoted many ideas on art, literature, philosophy, and architecture. One of it was the Roman Forum. Not unlike the Greek's Agora, the Roman Forum was initially a public place for commercials and political use, later on included religious rituals and celebrations. The Curia inside Forum was a meeting place specifically built for the Roman Senate. During the Republic reign, the Roman Senate hold an enormous power over civil government in Rome. Served as an advisor council, the Senators would discuss and vote on new legislation or established new policies.

The Senators were initially patricians who were appointed by the consuls, and later by the censors. The Princeps Senatus was the leader of the house, chosen from among ex-censors for a term of 5 years. He then took the responsibility to set the meeting times and places, opened and closed meetings, read documents before the members, met with dignitaries, and imposed order on other Senators, including the Consuls.


During the meeting, the Senators would take turns to address the topics. A strict speaking order defined who could speak and when was established, similar to that of the seating agreement, in which the Princeps Senatus held the first chair, followed by the consuls, censors, praetors, aediles, tribunes and finally, the quaestors. The Senators could then debate on the concerning matters. After the discussions, the voting would be called by physical movements in the house. The Senators would stand up and move toward the side he approved. Unimportant matters could be resolved by a show of hands. By rule, every meeting must end by nightfall. The essence of a Senate voting process was portraited in the famous painting Cicerone denuncia Catilina by Italian painter Cesare Maccari. The painting depicts the debate between Cicerone and Catilina. By the end of the voting, all Senators had moved to the side of Cicerone, leaving Catilina abandoned. Even though the Roman has shown the advancement in meeting conduction by creating a meticulous procedure, there were still some weaknesses. For example, because there were no limits to debating, Senators might employ various methods of subversion to delay the votes. Among these, the practice of filibuster, or speaking at incredible lengths was the most popular one.

The expansion of meeting spaces & Robert's Rules of Order

By the 19th century, a large numbers of new universities had been built to meet the increasing demand to share academic information. As a result, the public need for larger gathering spaces also increased. At the same time, thanks to the industrial revolution and the development of railway transport, there were many new, larger hotels opened near or inside railway stations which started renting their spaces for meetings.

Beside product promotions and annual board meetings, new type of meetings emerged, including conferences, seminars, and academic lectures. By then, towns and cities were more aware of the benefit of mass meetings brought for them. Salesmen were hired to invite meetings to be held in towns. In 1896, the first convention bureau was established.

In 1876, U.S. Army Major Henry Martyn Robert penned the first edition of the Robert's Rules of Order after ten years of work. The set of rules were roughly based upon those used in the United States House of Representatives and also identified with the parliamentary law, and a guide to civil meeting procedures. After several overhauls, the latest edition published in 2011 combined the original ideas but also included changes to adapt to modern business.

The Robert's Order aims to boost the decision-making process as well as ensure everyone's right of speeches by providing standard rules and procedures for deliberation and debate. It covers four major aspects:

The Robert's Order sets the tone for meetings that attempt to make decisions. Companies often apply the rule with minor changes to fit with its organisation culture. Here is a very useful article from dummie.com providing the cheat sheet of the Robert's Rules of Order.

The revolution of technology in meetings

In 1990, Microsoft introduced PowerPoint - the first program which helps visualise presentations and organise speeches in the most coherent way. For meetings, Powerpoint has been the powerful tool to get away from boring paper handouts, help speakers share & distribute content farther and much quicker. According to various sources, there are more than 30 million PowerPoint presentations created every day.

As with something so ubiquitous, PowerPoint has its share of contempt. The biggest problem with PowerPoint lies in its sole function - visual arts. The article "Death To PowerPoint." found a staggering number of 36 percent of the preparation time for the average proposal was consumed by design and animation work by people without formal graphics training. The amateurish animation and stilted effects bore the audiences and distract speakers from focusing on the underlying structure of building a message using a powerful story line. A good story turns tedious data into something meaningful. A bad story covers under silly stock images and cringy animation effects.

As it turns out, many corporations are now turning their heads to alternative options. Amazon has banned PowerPoint presentations in all company's meetings. Speakers in TED conference are encouraged to use whiteboards or cue cards to convey the messages.

Scott Berkun, the author of The Year Without Pants, when talking about the unnecessary use of slides in presentations, noted "Many speakers use slides to mitigate fear. If you work hard to have clear points, and you practice. It's unlikely you'll forget anything important. Even if you do forget something, only you will know. Since there are no slides, as the speaker, only you know what you planned to say".

Throughout our history, humans have attempted to make meetings more efficient in lesser time. In many ways, thanks to the rapid development of technology, we now have many tools to help create better messages and make it easier to share to many platforms and different audiences. However, without a proper understanding of the purposes, the audiences, and the lack of knowledge to implement the right procedures, we accidentally create dreadful meetings that enclose the audience's minds and drain out all of their energy. To create a successful meeting is to create an environment where all the voices being heard and creativity flows. In estimation, people spend 30% of their time in meetings everyday. If you have to do it, make it worth.

While you are here:

We are planning to launch an educational mini series about different methods to make meetings more effective. Leave your suggestions in the comment section below.